My last post left off when I had arrived in Bucuresti for the Spring Fulbright Orientation.  The orientation was on the first day, but I covered that in my last post, so I'll skip to the second day, which was a day for excursions around the city.  First we went to the Parliament Palace.  It is the second largest building in the world (by volume), second only to the Pentagon.  It was started by the Communist leader/dictator Ceausescu but only partially finished when the Communist Revolution occurred, however it was completed afterwards.  One of the coolest things about the building is that is constructed entirely from Romanian materials.  Our group got a private tour (there wasn't anything special about it, we just weren't in the same group as the other tourists) that lasted about an hour, but only covered about 5% of the entire building.  There were some really lovely rooms in it; I was very impressed.

Our next stop was another, older palace.  This palace is called Cotroceni and is it where Romania's president lives.  But that isn't the part we visited.  We went to the museum/preserved part of the palace.  It was the residence of the royal family at the turn of the 20th Century.  Each room is decorated in the style of a different country.  As nice as it is, it's not all original.  There was a bad earthquake (maybe in the 1970s...I think) and nearly all the rooms had to be renovated.  They didn't allow cameras in and you couldn't really see it from the road, so I don't have anything to show you.

After this we went to lunch at a restaurant in the historical district that specializes in traditional Romanian food.  It was pretty good, but not as good as the homemade Romanian food I've had.  We tried to go to the village museum next, but it was closed, so instead we walked around a bit and went to a cafe for a short while before attending a concert at the Atheneum.  I went to a concert here at Thanksgiving as well, but I was just as awed by the building on my second visit.  The orchestra was phenomenal as well.


The next day I returned to Constanta.  One of the teachers that Josi worked with invited us to a special party put on by her church for International Women's Day.  There were games, food, and even some gifts for everyone.  I got a gift bag with chocolate, a scarf, and two pins.  It was really very nice.


The following day was Monday.  I had volunteered to be part of an event at the university called Global Village.  Essentially, foreigners set up tables with information about their countries.  I stayed up late making M&M cookies and putting together a slideshow with pictures from across the US.  I also majorly overslept. I showed up two hours late after rushing over as soon as I woke up to find that the event had already started.  I was severely disappointed in myself, but everyone was really good about it.  It was more of a milling around, stop by the tables on your way into the building sort of thing, so no one missed me all that much.  Hannah did a table for Germany, our friend Hazel from the International Cafe did a display on her country, Hong Kong.  There were also people from Brazil, Mauritius, and Croatia.

This same week Achilleas's mother was visiting from Greece.  She's a very nice lady and she cooked a nice Greek meal for me and Josi.  There were oven roasted red peppers stuffed with feta, some eggplant, some meat in a red sauce, and for dessert, ice cream with a topping of jellied tomatoes.  The jellied tomatoes were different, but I overall liked them.


At the end of the week, on Saturday, I went to Bucuresti a second time.  This was my favorite trip to Bucuresti of all time, because I went to meet my boyfriend, Nate!  For his spring break Nate came to visit me in Romania.  I went to Bucuresti to meet him and then brought him back to Constanta.  I let him wash up from his long travels, then we went out for the evening to meet my friends at an Irish Pub, in celebration of St. Patrick's Day.  It was crowded and loud and not a very good match for a travel weary fellow to meet a large number of people at once, but I think Nate's forgiven me. 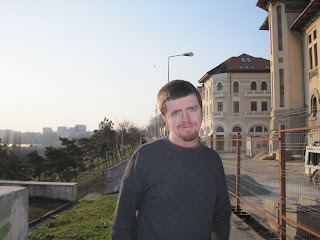 Over the course of the week I showed Nate some of the nicer parts of the city.  We went to some malls, piatas, restaurants, and cafes.  It was really nice to get to spend a week with him after three months without seeing him.  Nate got to try some traditional Romanian food at a restaurant, and my landlady surprised us one day by bringing over some sarmale (stuffed cabbage rolls) that her mother had made that morning, along with a few side dishes.  It was delicious, and Nate liked it.


Nate's last night in Constanta was also Atilla's birthday, so we went out to celebrate with him. 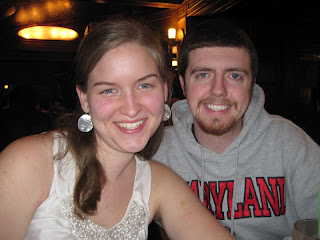 Nate's flight home to DC wasn't at a convenient time for the train schedule back to Bucuresti, and he wanted to explore the capital a bit, so we went a day early and spent the afternoon and evening in the city.  After I spent an hour dragging Nate around the downtown area looking for our hotel and arriving at a nearly identically named address that was NOT our hotel, we took a two minute taxi ride to the right place.  We went to the history museum of Bucuresti first.  Outside of it they were having a sort of festival.  It was a special market for handmade items and antiques, so Nate and I bought some souvenirs.  The museum was having a special exhibit on medieval torture devices, which intrigued us, so we got tickets.  It was a pretty gruesome exhibit to think that people were tortured and died on these devices. 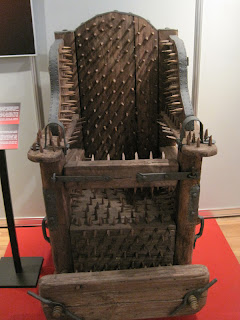 After the museum I took Nate to the square where the Communist Revolution started in Bucuresti.  There's a big memorial there.  It's basically an obelisk impaling an egg-shaped cage.  In the same area is the art museum which used to be the royal palace when Romania was a monarchy.  There's also the main university library, which has a statue of King Carol I in front of it.

We next went to the walking streets in the historical district for dinner.  Since it was a Friday in Lent, we were avoiding meat and went for sushi, which--while comparable to prices in the US--is far too expensive compared to cuisine at other Romanian restaurants.  We walked around the area a bit more and capped off the night with some pastries.  One of my favorite things about Romania is the cheap, decadent pastries and cakes.  They are amazingly delicious and dirt cheap--less than $1 for a pretty, gourmet pastry.  It's a real struggle of willpower each day not to buy and eat them in bulk.

The next morning I had to bring Nate to the airport.  Nate hadn't gotten to try a shaworma earlier on his trip, so we made sure to have it for breakfast.  A shaworma is a type of fast food of Turkish origin, although it is pretty similar to a Greek gyro.  The shops that make them aren't fast food places in the same way that McDonald's or Wendy's are.  These fast food places are more like street vendors.  The food is all made on site and not in microwaves.  Shawormas (at least in Romania) are either made with chicken or beef.  The meat is stacked on a tall, vertical rotisserie and is constantly heated.  The meat is shaved off for each shaworma.  It's pita bread with meat, french fries, and various toppings, such as shredded cabbage, ketchup, mayonnaise, pickles, cucumbers, and onions.  Romanians (at least in Constanta) are pretty obsessed with them.  I hadn't heard about them before I first arrived, and everyone who found out was astonished.  All my friends here from Romania and other parts of Europe all know about them and were surprised to learn that they weren't popular in the US.  Some of my friends are thoroughly hooked on them, so I had to make sure that Nate got to try a shaworma while he was here.  He got a beef one and liked it.  Even though we ordered smalls, neither of us could finish them in one sitting, so we got to have it for lunch too.  I went with Nate to the airport and said goodbye.  It was really sad for me, but I had plans to meet Josi's parents, so I was nicely distracted.

Josi's parents had flown into Bucuresti the day before and were now headed to Constanta.  I met them at the train station, helped them buy tickets, then took the train back to Constanta with them.  Atilla was nice enough to meet us at the train station in Constanta, drive Josi's parents to their hotel, and drop me off at my apartment.  Nothing terribly exciting happened this past week, although I did go to dinner with Josi's parents several times.  They left this past Thursday after nearly a one-week stay.  That evening Josi and I went to see The Hunger Games, which I have been waiting to see since they first announced they were making the movie.  I loved it; the adaptation from the book was pretty good.


This past Saturday we had a Lord of the Rings party.  Our original goal was to watch all three movies at once, have themed food, and to dress up as various characters.  I was the only one who dressed up.  I masqueraded as Legolas, which was a natural choice, considering my elven ears.  I wraped crackers in lettuce and called it lembas bread, but that was the extent of our themed food.  And we only got to two movies.  We watched half of the third movie yesterday before giving up.

Yesterday was also Palm Sunday.  Most people in Romania are Orthodox, so they celebrate Easter on a different schedule.  This year it's one week later than Easter in the western churches (and it is also my birthday).  But I'm Catholic and go to the Roman Catholic Church here, so for me and my parish, Palm Sunday (the Sunday before Easter) was yesterday.  In Romanian, Palm Sunday is called "Duminica Floriilor" (Sunday of the Flowers).  I went to mass all excited to get my yearly palms and was surprised not to see a single palm frond around.  Instead of  palms, they use pussy-willows. Not what I expected, but it works.  I was a bit sad that there weren't enough for everyone, really just for the kids, so I didn't get to keep one.  I was intrigued now that I knew not everyone used palms on Palm Sunday, so I asked Achilleas and Daka about the traditions in the Orthodox Churches in Bulgaria and Greece.  Daka said it's Flower Sunday and that they most often use a blue flower.  Achilleas only knew the Greek name for the plant they use and showed me a picture of it online.  It kind of looks like a bay leaf.


I'll be staying in Constanta for this upcoming week, and then Josi and I will be going on a two-week Easter vacation.  It should be lots of fun, and I'll tell you all about it next time.