Sibiu and Some Odds and Ends

Boy am I behind!  I hope I can catch up now, post by post!  I don't want to have to skip over anything really important.

That Thursday evening (May 10th), still groggy from my two days of an Atlantic crossing and two days of teaching, with only one night of sleep, I boarded an overnight train to Sibiu.  I was headed to the East-West Conference at Lucian Blaga University in Sibiu.  The Romanian-US Fulbright Commission was one of the sponsors so all of the American Fulbrighters in Romania were attending.

Around 3:00 am I got off the train at a small station, in a town called Copsa Mica, which was once infamously the most polluted town in Europe, or so I have been told.  It was NOT a nice place to wait for my second train, but luckily my first train was running an hour late, so my layover was only one hour, rather than two.  When my second train arrived, I boarded an extremely ramshackle train with at least thirty other passengers, a bigger number than I would have thought.  Over the next hour and a half the train stopped at many small towns, at each station collecting at least a dozen passengers, far more passengers than I expected on this early morning train. 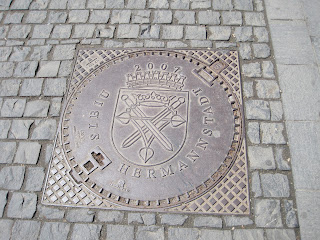 When I arrived in Sibiu around 5:30 am, I took a taxi to the apartment of Nick and Naomi, a couple in the Fulbright program who live in Sibiu.  The rest of the Fulbrighters had arrived the previous day and were staying in pensions in a nearby village, so it made more sense for me to just stay  in the city until the conference began later that morning.  I took shower, changed into my conference clothes, and had homemade pancakes.  Nick and I were about to leave for the conference when I came to the realization that I had only brought sneakers on my trip.  Sneakers would NOT match my dress.  Naomi offered her shoes, but my feet are enormous, so they were all far too small.  Nick, however, had a similar size to me, so I wore men’s dress shoes to the conference. 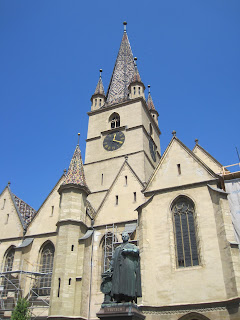 We met with the other Fulbrighters at the first session of the conference.  I hadn’t slept much on the train, so I was extremely tired, sitting in one place, and…falling asleep.  The first speaker was bizarre.  She was talking about some sort of “new age media.”  I’d be happy to harp about it in person next time you see me, but I’ll spare you know.  One of the other speakers was a Fulbrighter named EJ, who certainly gave the most interesting lecture of the session.  There was a third lecture…by a man…about something; if I’d been awake I’m sure I’d be able to tell you about it.

After the first session there was a (much-needed) coffee break.  The Fulbrighters were all given the option to skip the next sessions to explore Sibiu; and most took up the opportunity.  The weather was beautiful, and we had ice cream, had drinks at an outdoor café, and did a bit of shopping and walking around.  We went back to the conference for lunch, then back out in the city center again.  We returned to take a bus to the pensions in the nearby village.  There, there was a delicious, traditional dinner for all of the Fulbrighters.  The next morning we all took a little excursion to a nearby fortified church.  We then dropped off half of our group in Sibiu, while the others, including me, travelled by bus to Bucuresti.  At lunch time, we stopped in Brasov, had lunch, and browsed some stalls at a special open-air market.  I stayed in a hotel in Bucuresti that night, and I got to spend my evening at a concert and then a café with Raluca and Maria, two friends I met when I worked at Kellerhaus.

Josi was returning to Bucuresti from her trip the following day (a Sunday, FYI), so I waited for her, so we could travel back to Constanta together.  Since she didn’t come until the evening, I spent a day walking around the old city, visiting the history museum, and attending mass.  I really enjoyed seeing the collection of gold at the museum, as well as a replica of Traian’s Column, and enormous structure that depicts the conquering of the Dacians by the Romans in over 100 massive panels, spiraling up a large column.

I spent much of the next two weeks grading assignments as the final semester for my third year students wrapped up.  One particularly bright and sunny day Josi and I went to the beach at lunch time and had the whole place to ourselves.  Josi and I also went to a special museum night in Constanta.  We visited the archaeological museum with free admission around 8:30 one evening.  Since it was a special event, many others were there, and it was quite crowded.  We also had a notable dinner, prepared by Daka.  He made us a Bulgarian dish, Kavarma.  It was really delicious, and now I have the recipe.