One Month Down, Eight to Go!

Another week has gone by.  Many of the things I've done are now routine: going to class, teaching class, spending time with Josi and Angelina.  This week we were joined by a fourth friend, Camille, a theatre student from France.

On Friday we went to the Cafe International, which is a little place operated by the missionary organization Youth with a Mission.  It's very small but so nice.  They were having a live concert by a young woman from Britain who arrived in Constanta to join in missionary work only a few weeks ago.  She was excellent, singing, playing guitar, and playing keyboard.  They have smoothies, coffee, hot chocolate, and tea, and all for exceptional prices.  And the people there are so nice.  Everyone was super friendly and we met people from Britain, Hong Kong, Sweden, and Oregon.  The cafe is only open in the evenings, and each day of the week has a different featured activity.  For example, Monday they are having conversational English lessons, and Thursdays there are guitar lessons.  I really enjoyed spending the evening there.  Afterwards, Josi, Camille, Angelina, and Atilla (Angelina's boyfriend, from Turkey) came to my apartment for pizza and a game.  We played Apples to Apples, which I brought with me to Romania, thinking it would be a great game to play with students to help them to improve their English skills.  It had a good reception with all my non-native English speaking friends, so I hope to schedule a time for interested students to play at the American Corner of the University.

On Saturday we celebrated Halloween.  Now, I should first tell you that Halloween simply is not celebrated in Romania.  (This may be surprising for people whose knowledge of Romania--at least before finding this blog--ended at "That's where Dracula was from.")  Halloween decorations are hard to come by, as are costumes.  We found three stores with VERY limited costume selections and even sadder selections of decorations.  However, we were able to scrape together so costumes for a Halloween party hosted by two German girls studying in Constanta.  I went as an angel, Camille was a witch, Angelina used her lab coat from medical school in Russia and went as a nurse, and Josi was a policewoman.  It wasn't bad, but it just wasn't the same as Halloween in the US, so I found myself with my first bout of homesickness--ever.  I was never homesick when I went to summer camp or when I left for college, but I got homesick for an American Halloween and all the traditions and people that go with it.  That said, I should let you know that it was fleeting.  While I still miss everyone back in the US, I am quite happy to be here in Romania and I'm looking forward to the exciting things happening in the weeks ahead.

Sunday I woke up not-so-bright-and-early as I thought I did.  Daylight Savings Time comes a week early in Romania and I was oblivious to the change.  (To be perfectly honest, though, I never expect the time changes.  Twice a year someone inevitably "reminds" me that I'll need to change my clock that evening and I am saved from any disasters in punctuality.)  I had to attend an orientation meeting for the program I just joined, called Money Sense (more on that in a moment).  It was scheduled to start at 11, but attendance was a bit sub par.  Noting that some people may have been confused about the time, I was suddenly informed of the time change.  It was only then that I noticed my watch was an hour ahead of my cell phone.  Luckily, while I was oblivious to the time change, my cell phone, which I use for an alarm clock, was not and took car of everything for me.  I got an extra hour of sleep and didn't know it. 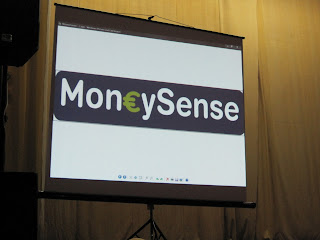 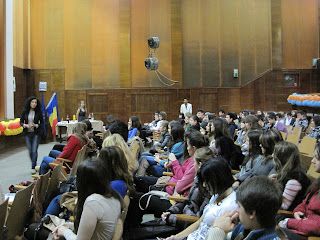 Back to Money Sense.  Money Sense is a program imported from Britain, for high school students, about personal finance.  As a budding social studies teacher and former captain of my high school Life Smarts team, I am just nerdy enough to be super excited to be involved in this project.  Since I applied for the Fulbright grant, I have wanted to additionally get involved with younger students in Romania.  This program brings a series of lessons on personal finance, free of charge, to high schoolers.  It's being organized here in Constanta by the NGO (Non-Government Organization) AIESEC.  AIESEC is about international leadership among young people, and there is a student office of the group at my university here.  Interestingly enough, they found me, or rather, they found Josi.  Since many of the students in the Romanian language course are part of the educational exchange program Erasmus and since Money Sense is taught in English, AIESEC was scouting the international students for volunteers to help out with the project.  They got Josi's name, and then Josi told me about the project.  It runs through November and December.  This upcoming weekend I will be attending a training session in Bucuresti for Money Sense. 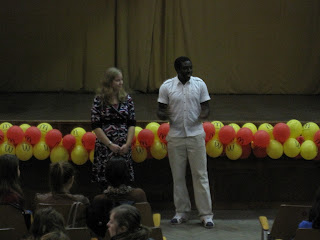 On Sunday, all I had to do was introduce myself to the student participants.  When I announced that I am from the United States, there was a small, collective gasp among many of the high school students.  Now, I can't say if it made me extra proud to be an American or other such things, but that little gasp did remind me how special the idea of America is to many people today.  I'm not saying this to sound pompous and assert that America is better than all the other countries, but to quite a few people, especially youth, America is still that land of dreams that so many immigrants have pursued over the past few centuries.  From my experience in such a short time, I can tell you that many young Romanians have dreams to visit or move to the US and seeing these dreams makes me feel two things: one, extremely fortunate to have been born into the country of so many people's dreams; and two, a strong sense of responsibility to make sure that I exemplify all the things that are truly good about the United States and down let their fascination with my country die because of my actions or demeanor.

After the orientation I went to the high school where Josi is teaching, to join her and a few of her students for their cooking project.  The four girls who participated in the activity made some traditional Romanian food: sarmale and mamaliga.  It was really delicious!

I returned home to my apartment for a short while before heading to evening mass.  As I've been doing for the past four Sundays, I half muttered along in English and occasionally extremely broken Romanian.  Afterwards I went to the little religious shop in the back of the church to ask if they had a book with the mass parts written out so that I could follow along and learn the responses and prayers.  Luckily the young woman at the window spoke English quite well and was very helpful.  With the help of her mother, who runs the shop, she tracked down the lectors' book for October and gave me a copy, with a promise to get me one for November, she also sold me a little booklet with the standard prayers in Romanian.  Lastly, she told me that she thinks she has a book at home with the words to the liturgy all written out, and she promised to leave it for me at the little shop for the next time I come to mass.  She also gave me her number in case I need anything.  (Sidenote: I have an awful crick in my neck and her business card says she does massage, so if my crick won't go away, I know exactly who to call to help make it go away!)

After mass I went to Josi's apartment, where, with Angelina, we watched most of V for Vendetta, which I'd never seen before, but was really getting into.  Angelina also brought us a special Russian treat--caviar!  Josi doesn't like hates fish and was NOT a fan.  I had one half-slice of bread with it.  It wasn't terrible, but I can't say I fancied it.  The taste was very potently fishy and as you ate the eggs they popped in your mouth, which I found weird, but is Angelina's favorite part about eating caviar.  It was nice to try it, especially since Angelina gets it from Russia for much cheaper than I could ever buy it in the US, and now I know I shouldn't spend loads of money ordering in a restaurant.

I have such a busy schedule coming up.  For November: 3rd-6th I have the "Train the Trainers" session for Money Sense in Bucuresti.  The 8th I return to Bucuresti and on the 9th I fly to Sofia, Bulgaria for a regional conference for English Teaching Assistants.  The 12th I return to Romania and on the 13th to Constanta, where I will be attending an opera that evening.  Today I just got the word that on the 23rd and 24th there will be a Fulbright get together in Bucuresti for Thanksgiving.  Flanking this little trip I have a Thanksgiving activity at the American Corner at Ovidius University on the 21st and the 25th.  And throughout this time I will be teaching classes, taking Romanian lessons, and participating three times a week in Money Sense.

Lastly, today Mihaela took me to the police station to register for my residency card.  I gave them all the paperwork and they accepted my application.  My card should be ready for pick up from the police station in about a month.

As promised to a commenter, here is an overhead view of Constanta, courtesy of Google Maps.  The lake I talk about is the pinpoint in the map: