The day began when all the Fulbrighters boarded the bus for Sinaia, to go to Peles Castle.


We arrived after a 2 1/2 hour drive.  The walk to the castle took us up a cobbled road.  When we got tot he top, the view opened up, and it was like stepping into a fairy tale!
The castle is truly more of a palace in function.  It was built by Romania's first king, Carol I in the late 19th century.  The outside is quite grand, but the interior is breathtaking.  The rooms have ornate wood carvings, Murano glass, Bohemian crystal, Persian rugs, and weaponry from across Europe and Asia.  I'd have loved to take pictures, but there was an extra fee of approximately $10, and I just couldn't justify spending the money. 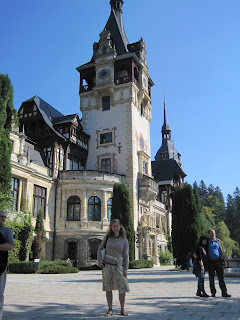 There were also vendors selling souvenirs and local crafts nearby, and I took the opportunity to buy some crocheted and embroidered tablecloths, a few postcards, and a carved wooden set of salt and pepper shakers shaped like bears.  They were all at a very reasonable price.
After visiting the castle, our group continued on a winery up the valley.  The winery began in 1892, when the original producer of the wines was brought to the area by the king to produce wines for Peles Castle..  The winery is most famous for its sparking wines, which it still makes with the same process used when it began.

After our tour of the wine cellar, we had a wine tasting with three different varieties of sparkling wine. 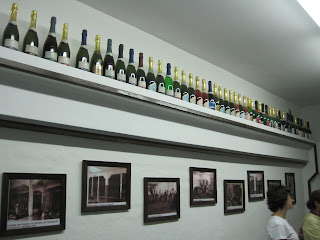 After the wine tasting, our group had lunch at the winery restaurant.  Afterwards, we headed back to Bucuresti.

When we returned to the hotel in Bucuresti, two other ETAs and I headed out into the city for the evening.  We weren't sure what to do or where to go, so we inquired at the hotel desk.  The hotel driver kindly offered to drive us to the old part of the city.  We walked around an open market and stopped for gelato.  After an hour or so, we called up the hotel and the driver returned to bring us back.